Well, all we got this morning was a lone trout from the depths of Goose Pond in Chatham. Travis reeled it in and it surrendered without much of a struggle. Anyway, here are some photos from this morning. 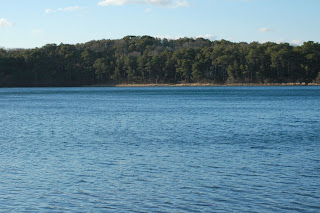 Goose Pond's deepest point is 50 feet below. It was very windy and cold. The first spot we tried to cast from had the wind in our faces. So we moved to another spot across the pond where it was relatively calm and warm. Occasional gusts of wind hit the surface of the pond with a whack. 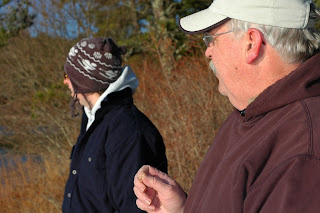 Not sure what Travis and Russ were looking at. But this was a good shot. 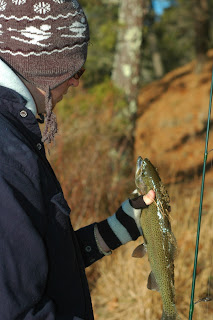 Travis carefully inspects the trout he had just reeled in. With the surface of the pond much colder than its depths, I suppose most of the marine life decided to stay under its thermocline. 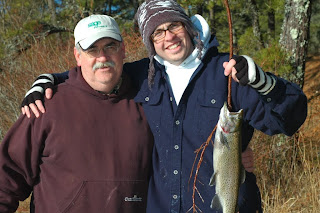 A poignant moment for father and son (that trout probably felt otherwise). 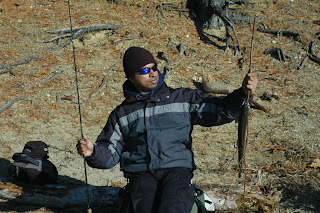 I was made to sit down and pose...with that fish. Man, I do love that 50mm prime lens I had on my Nikon. I think that I will use it more this year. It is very light and small to carry around.
Posted by Hoarse Whisperer at 11:29 AM No comments: 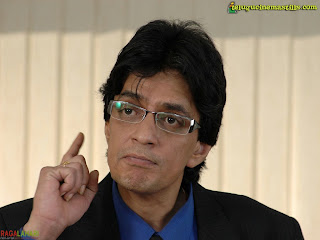 Raghuvaran is...was one of my all-time favorite actors. He always had a presence no matter how small -- good or evil -- a role he played. When I saw him in a movie, there was a feeling that everything would be alright. Kinda the same feeling I get when I watch Christopher Walken in action :) 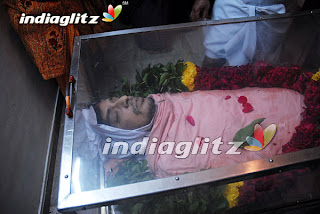 Posted by Hoarse Whisperer at 9:02 PM No comments:

Posted by Hoarse Whisperer at 9:58 PM No comments:

This huge lens was introduced at PMA 2008. It is meant for conventional photography. But even if I could afford it--its a whopping $25G before tax and shipping--you wouldn't catch me carrying it around--it weighs 35 lbs--in downtown Boston. I could be taken down by Boston Police for suspicious behavior. 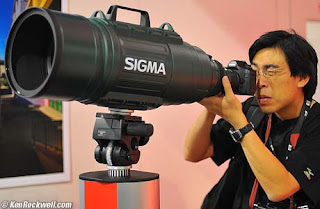 Had this lens been around last year, Eliot Spitzer would have been caught doing the nasty earlier.

Ken Rockwell has a note on this lens in his website.

Posted by Hoarse Whisperer at 3:13 PM No comments:

Spring training actually began in early February after I had returned from India. I was done with snowboarding by that time. For me, Spring training is roughly 5 months of periodization and comprises of a GPP, a strength, a body composition (BC) and a brief hypertrophy phase. The BC phase is new for this year and I am not as interested in hypertrophy as I used to be. Let me explain.

GPP stands for General Physical Preparedness and is your ability to be prepared to do any sport on a given day. During this phase, I work on fixing imbalances throughout my body as well as attempt to recover any lost "basic" work capacity. This year, the GPP phase comprised of ice skating, some hiking and calisthenics at home. 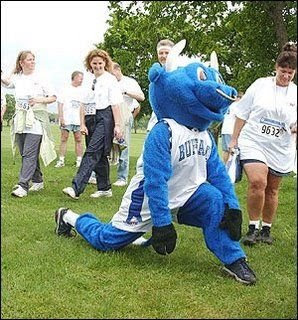 I ice skated about 5 times in February. I timed 3 of those ice skating sessions to be first dates as well :) I hiked 20 miles of trails in the Smokies during the last weekend of February. The calisthenics involved a lot of unilateral work--for example, lunges and single-leg squats. I hit the gym only once during the entire month. This phase is also the time when I take the least amount of fish oil--no more than 2 grams a day. The GPP phase ended March 2.

I am currently in the strength phase. This year, during this phase, I will be concentrating on a high volume of training in as little time as possible (perhaps as less as 1/2 hour per training session). I will also up the fish oil intake to around 6 - 8 grams a day. I will be using the back squat quite a bit during this phase and it will lay the foundation for the sprinting in the next (that is, the BC) phase. 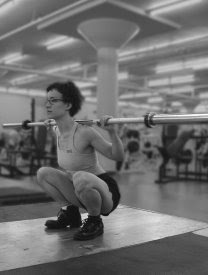 For the first 3 weeks, I plan on doing only one movement per session for upto 3 sessions a week. As an example,

The strength phase will end in mid-April and will comprise of no other physical activities. I will also take the 4th week off from training. Then the last two weeks will comprise of a modified version of the above weight training approach albeit with an important role played by Romanian Deadlifts and some direct Ab work.

I will talk about my approach to the BC and hypertrophy phases later.

Hey! They've been spiking my drink!

So...finally, our tap water is suspect. I had a date over my house last summer and she wouldn't drink tap water. We broke up.

Now I am seriously considering buying bottled water. The afore mentioned link states that some bottled water drinkers are exposed as well. The majority of my water intake happens in the office where we use bottled water. So maybe I won't be spending a fortune on buying my own bottled water. I am not sure how much better mineral water is over regular spring water. But I am going to try mineral water for a few months and see how I feel and perform overall. If I don't see any significant improvement in any way, I will go back to tap water. I like to break up with girls now and then.
Posted by Hoarse Whisperer at 11:58 AM 2 comments: