An Airbus A380, the world's largest passenger jet, passes a taxiing Qantas Airlines Boeing 747 after touching down at Los Angeles International Airport on the inaugural visit of the superjumbo jet to Los Angeles, Monday, March 19, 2007. (AP Photo/Reed Saxon)
Posted by Hoarse Whisperer at 12:10 PM No comments:

So India is out of the world cup. Rather than lamenting about shortcomings in the Indian team, I've been wondering about what brings out the best in the top teams out there (such as Sri Lanka and Australia). My conclusion: superior attitude. You know, the attitude that goes, "Fuck...them...all! We are going to destroy our opponents and move on without looking back!".

Honestly...Indian players, especially the ones from prominent backgrounds (half the team), might have a holier-than-thou attitude, which would make them subconciously underperform on the field. I have been a culprit of this attitude myself. I would tell myself that, owing to my rich Indian heritage, I had superior talent (great memory, great analytic skills, great social skills, etc.) than that Mexican guy or that Irish dude and so would end up putting in only 50% of effort into everything I did. One day I realized what was going on and gradually started making changes. Today I take very few things for granted. Then again I don't have a billion people looking up to me. The Indian team does and it has been failing to deliver since 1985 (at least they have been consistent on that).

Greg Chappell, the Indian coach, did his best and cannot be blamed. It is the players who need to reevaluate their psyches going forward...
Posted by Hoarse Whisperer at 10:58 AM No comments:

One of my current passions is attempting to locate and buy the books that I had read in my childhood and teenage years in India (and, believe me, there were a lot of them). And one of the books at the top of my list definitely has to be Nikolai Nosov's wonderful The Adventures of Dunno and His Friends. I am pretty sure that the hardcopy of this book is lying around somewhere with my family's belongings back in India. Growing up, I wasn't really into movies or hanging out with friends all that much. About the only things that interested me were weight lifting and books. Today, When I want to relax, I most certainly will pick up one of these books rather than switching on the TV.

I still remember back in high school when I would rent a bicycle and take Nosov's book out with me to the countryside to read it all over again for the umpteenth time in the blazing heat. The books' authors may have drawn parallels to people or stories in real life. For me, even today, all of that is, as a great man recently put it, "irrelevant". Personally, I try not to see superficiality in these stories. Some of the characters may be superficial (Dunno himself comes across as superficial) but its like my mind cannot process emotions, other than laughter, above a certain level when I go through the pages on these books. Delightful! And these stories easily dish out a bag of nostalgia.
Posted by Hoarse Whisperer at 1:44 PM No comments:

An article in the BBC today quotes a British Colonel Ed Brown (that name sounds more American to me) based in Iraq as saying that, "Things are imperfect, but we make a huge mistake, and we will move down a road that will end in real failure, if we try and turn this into Surrey. It isn't."

No, damn it, its not Surrey! No one delivers milk in a bottle to one's door in Iraq. If anything were delivered, it will likely be the last delivery one will ever receive, if you catch my drift. There are no dance halls to take the ladies out on a beautiful autumn English evening (I wouldn't mind a few of those, by the way) although I am quite sure one likely does a fair bit of dancing when finding oneself in the midst of a firefight.

The Colonel further adds that, "There is a level of violence here, but that is life in Iraq. It's been like this for thousands of years. It's not going to change."

By Jove, they finally got it!

Installing Democracy in the middle east?! Who were they kidding?
Posted by Hoarse Whisperer at 3:34 PM No comments:

And So It Continues?

"Excess on occasion is exhilarating. It prevents moderation from acquiring the deadening effect of a habit. -- W. Somerset Maugham" 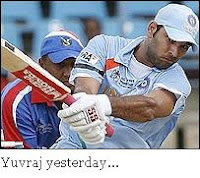 But India played against minnows Bermuda and not an Australia. Nevertheless, a win is a win. And since almost all those who batted on the Indian side should have felt good about their individual performances and the team's performance in general, I hope that it is with a feeling of elan (and not too much confidence) that India will go up against the much more experienced Sri Lankans in a few days time.

Anil Kumble proved his effectiveness and economy yesterday against Bermuda and I certainly hope that he will be retained for the match on Friday.
Posted by Hoarse Whisperer at 10:24 AM No comments:

And So It Ends?

Well, Pakistan is out of the World Cup. They lost to the West Indies and...get this, Ireland!! It was a close victory...but still a huge victory for the Irish minnows! When I drove into Boston yesterday afternoon, there were a lot of Irish milling around Faneuil Hall and spilling out into the roads. I was like, "Ah, Cricket has made it to America!". Then I realized it was St.Patrick's Day. Oh, brother...

India lost their first match to...get this, Bangladesh!! It didn't take an expert commentator to see that the Bangladeshis were full of enthusiasm bringing to the table something that the Indian team did not seem to have: heart.

India's batting was "spineless" as an Indian daily, The Hindu, put it. Given that the pitches in the Caribbean usually favor bowling, India's Captain Rahul Dravid should have opted to field first in an effort to study the pitch. Up to that point, everyone else who won the toss opted to field. If Dravid wanted to try something new...well, he shouldn't be doing that in the World Cup. Incidentally his earlier warning to his team to be "clinical" against the Bangladeshis seems to have fallen on deaf ears. To justify this accusation of mine, all you need to do is analyze what got Sehwag and Uthappa out: complacent, "stylish" batting at a time when they needed to have stayed on their toes and taken the time to study the pitch.

I am going to keep my fingers crossed for India's second match against...get this...no, wait! Let me rephrase.

I am going to keep my fingers crossed for India's second match against Bermuda tomorrow.
Posted by Hoarse Whisperer at 10:20 AM No comments:

Well, the first ODI match, between the West Indies and Pakistan, of the ICC's Cricket World Cup begins today in the Caribbean. The tournament has been reported to have cost around US$ 400 Million to stage. With 16 teams (the largest ever), it seems to have been modeled after the tournament format of FIFA Football.

Australia and South Africa, followed by India and Sri Lanka, are tipped to be strong contenders for the cup. There are a few new teams (including "what the fuck?!" The Netherlands) playing in the World Cup for the first time.

But it looks like that the defending champions, Australia, don't have any legit spinners and that is going to be tough for them in the Caribbean pitches (that usually James Bond likes to play in, if you get my drift). The Aussies recently had a series of five consecutive defeats in ODI. That might just have been a ruse on their part to deceive people into thinking that they are going into the World Cup without form.

Nevertheless, it is going to be a very exciting tournament!!
Posted by Hoarse Whisperer at 12:03 PM No comments:

I was reading about the difference between Sunni muslims and Shia muslims on one of BBC's wonderful quick guides (I already knew the difference but I thought I might read about it anyway).

Now I have read that US and British forces are just as responsible for killing Iraqi civilians as much as the Sunni "death squads". But one thing that occurred to me was how influential the Saudis could be in diffusing a large portion of the violence in Iraq...if they wanted to. Having been long under the "mentorship" of the United States, I wouldn't be surprised if Saudi Arabia (where the majority of muslims are Sunni) decided to rebel by using the sectarian violence in Iraq as a future "negotiation" tool with the United States. The Saudis could just be seeing this as a way to "restart" Wahhabism. I mean, why not? Americans are starting to realize that fossil fuels will not be around forever and many Western companies are (avidly) researching alternative fuels to meet the demand for the west's energy needs. If such fuels were found and implemented widely, oil would probably lose the luster that it now has (we probably won't be around to confirm that).

Of course, for all I know, Saudi Arabia might truly want the violence in Iraq to end as well. After all, a quiet neighbor is a good neighbor. But we have also seen that the influence of religious beliefs in certain parts of the world almost always overtakes any semblance of common sense.

1. So what can be done to drastically reduce the amount of violence in Iraq?
2. Should the US pull out?
3. What needs to be done to ensure that the Kurds and Turkmen do not get antsy a few years down the road?
4. How can Iran contribute to a solution? And even if Iran can, will it contribute if given a chance...especially within the context of the pressure the international community has on it to give up its nuclear "energy" ambitions?
5. And what will Israel have to say...no let me rephrase. How would Israel feel about the West working with Iran?
Posted by Hoarse Whisperer at 11:15 AM 3 comments: