Yesterday, on my way to the office, I breakfasted at the Country Kitchen in Weymouth. Usually I order either eggs, sausage and toast or steak, eggs and toast. Yesterday I got cheese omelette. I don't like mixing cheese with other foods. So I don't know why I ordered that. But it did remind me of some happenings back in 10th grade.

"So what happened?", asked my 10th grade Computer Science teacher with a genuinely concerned look on his face. The fact that the prettiest girl from 10th grade was standing next to him holding some exam papers for his review wasn't helping. She wasn't simply a looker. She was also top of her class.

"I think....I didn't prepare...well", I replied shyly. That was followed by a quick furtive look at the girl. In hindsight, I realize that I had been sweating it out for no reason. She had been so innocent, so sweet that she probably didn't even know how to mock or think lowly of others. Anyway, only a few weeks earlier, at the beginning of the school year, my Dad had introduced himself as a professional software programmer to my teacher. So my teacher was, I guess, curious as to how the son of a programming guru ended up taking only 20 points out of a 100 and in a monthly exam too. But first I must explain how school exams were structured in those...wonder years. Or rather, I will lay it down for ya. 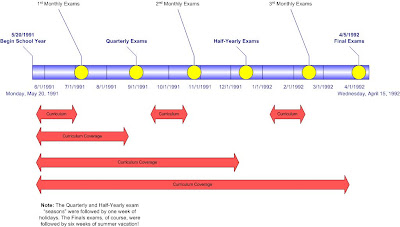 Monthly exams were somehow easier because they only covered content taught since the last exam period ended. So, for instance, the 2nd Monthly exams only covered the curriculum taught after the Quarterly exams. While this was the case with a subject like English, History or Geography, it was trickier with the sciences especially Mathematics. A theorem that you learnt at the beginning of school year more than likely was needed to solve a problem during the 3rd Monthly exams even if that problem had been taught only in the context of a recent topic.

So how did all that relate to the pretty bad 20/100 in Computer Science?

See in 10th grade, we only had, if I remember right, one class a week on Computer Science. And the 20/100 happened during the 1st Monthly exams when the software programs were at their most basic. We were essentially performing additions and subtractions. And the pretty girl had been recruited by my teacher to review and score the exam papers because he had figured out that she, a 16 year old, was so good. So more than my low score, it was the study in contrast between me and her that rankled but only for a short while. I will write a bit more about this girl in another post...but all this brings me to the reason why I wrote this post: I just couldn't be bothered with taking exams (or anything else for that matter) seriously.

When other students would sweat, pore over books and consult with each other right before exam time, I would be sitting relaxed and gazing out the window...at the swaying trees outside, at a couple of crows in earnest conversation on a power line, at a workman frantically gulping down water after an hour of hard labor on the hot street...and wondering if that water somehow tasted any better to him. And during an exam, I would more often than not just wing it. While the learned types would ask for more paper to tackle the extra credit questions, I would already be walking out of the exam hall.

Come to think of it, I still cannot be bothered with taking a lot of things seriously today. This past Sunday, I was relaxing in a little cottage in Eastham when my folks called and said that they were coming down to discuss "very important matters" with me. It was a damp, rainy day. While I waited for them to arrive, I was standing by the cottage door watching the rain drizzle through the trees in the yard outside. And I observed this little chipmunk scrambling between the potted plants and bushes looking for food in a desperate bid to beat yet another New England winter. When it found something to eat, it seemed to forget the world around it as it focused on getting that food down, blissfully oblivious of my presence just beyond the glass of that storm door. Suddenly I felt like that kid in school from a time long gone by.

You are probably asking yourself, "So how did that cheese omelette in Weymouth remind him of 10th grade in Madurai?!?!".

Good call. When I figure that out, I will post again here...

Seriously though, that breakfast didn't remind me of that simpler life. Something else that frustrated me this past Sunday did. But I thought the cheese omelette would make a great start.

Posted by Hoarse Whisperer at 12:30 PM No comments: