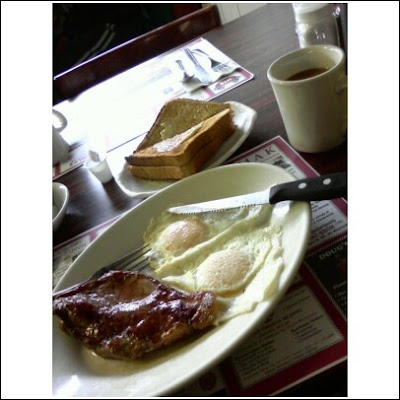 Steak, eggs, toast and coffee.
Posted by Hoarse Whisperer at 8:46 AM No comments:

A poem, everyone, a poem!

So this girl I am seeing couldn't make any peach tarts. Being the presumptuous son of a gun that I am, I came with a poem from the point of view of the girl ;-)

O dear little peach tart,
You've played such a vital part,
In that life of mine so smart,
But now I am seeing an upstart,
Who happens to be pretty swart,
That means you have to depart.

Sweet.
Posted by Hoarse Whisperer at 6:24 AM No comments:

If you are a slow runner or "jogger", this likely won't apply to you. I am talking about sprinting. Earlier this summer, during a sprinting session, I felt a little tug behind my left knee right at the crease. So I stopped sprinting because I wasn't sure what the heck was going on. That knee was slightly uncomfortable for a few hours after. I decided to take a month off from running. During that time, I went on a road trip and then started working on my full squat numbers.

I started sprinting again two weeks ago and sure enough, toward the end of that 1/2 hour session, there was that tugging again. So last week, I did a bit of research to figure out what could be causing that. And I realized that I was probably hyper-extending my left knee at the same time the left foot touched the ground...slightly behind me in order to propel me forward. So then it seemed like a question of form. This past Sunday, I decided to concentrate on a high knee lift on the leading leg. This seemed to give me the impression that I was running slower. But my left knee didn't bother me. I realized that by raising my knee high, the foot of that leg touched the ground more under me, whilst the knee was still bent, rather than behind me, when the knee would be more extended. With my form now corrected, and as long as I "pawed" the ground enough with that foot, I realized that I could actually propel myself faster.

So I now seem to have perfected my sprinting technique with a high knee lift of the leading leg, shoulders down and vigorous pumping action of the arms (and elbows maintained at around a 45 degree angle). Only time will tell as to how efficient this new sprinting mechanic will affect my body.
Posted by Hoarse Whisperer at 6:13 AM No comments: