This is a version of events that ended in a three day camping/hiking trip outside Yuma in the Kofa national wildlife refuge area a few years ago in October. The starry skies I eventually gazed at for hours at night were...well..out of this world.

Technically, I was stuck in a ravine. The engine had overheated and I found myself pulled over, a rare occurrence that must be in an age of liquid cooling. But it was a rental and this was the southwest. In a way, I was happy for the break. I got out of the car and stretched. Something creaked. I figured I was getting old. I took a deep breath of the tepid desert air and squinted up at the sky. The sun looked like it was painfully making its way through another day. I stood still and cocked an ear. The silence of the desert was deafening. Everything was ancient around here. Brrr. 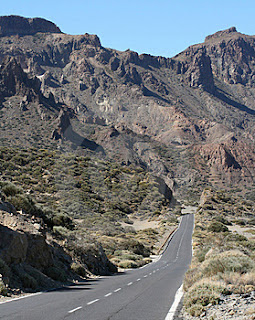 It was an unremarkable road, the one I was stranded on. I hadn't seen traffic in a good hour. Dark grayish, the road stretched bare before disappearing around hills a short distance off to either side of where I was standing. As the invisible tendrils of a slight breeze worked its way over me, I consulted a map and realized that I was in the middle of a stretch of road shaped like a lazy lightning bolt. I pondered that for a moment. Was a lighting bolt ever lazy?

It was a clear day. I looked back the way I had come, over and beyond the first hill in the entrance to that ravine, and thought I could barely make out the Sierre Madre hanging in the distance as a single hazy, purple blotch. But the Sierre Madre were in far off Mexico and well beyond Yuma. Maybe it was just some strange effect particular to the desert. I pursed my lips and looked around furtively. No, there were no skeletons, human or animal, lying about.

The hills, for it would be too generous to call them mountains, in my ravine -- my ravine, was it? -- loomed up on either side of the road. They appeared barren and devoid of life. The hillsides glinted here and there. Were those a result of nature's eroding effect on rock, perhaps shale? Was one of those glints an old arrowhead? Or maybe a bullet from the civil war a 150 years ago? There were a few stunted trees sprinkled near the top of the hills. Gnarled and leafless, they looked like they might have been humans strung up on poles to culminate in a soundless and grotesque death. A few of those trees had the odd bird circling over them. The birds seemed motionless in the air. Were they buzzards? I looked around nervously. Time to get movin'.

I got in the car and turned the ignition. The engine started on the first try. Thanking my lucky stars -- and it would be a few more hours before those came out -- I gingerly eased the car out of the narrow shoulder, onto the road and out of serene no man's land.

Posted by Hoarse Whisperer at 12:37 PM No comments:

Since I happen to have quite a bit of time on my hands these days, I have gotten back to an old habit of going to the movies. Matinees mostly.

Trouble with the Curve

Clint Eastwood's movies are always absorbing and this one isn't any different. I thought that the father-daughter relationship story line might prove to be a bit on the heavy side. There are a couple of heavy moments but the overall tone of the movie is light and breezy. Both Eastwood and Amy Adams are experienced actors and these roles do not stretch their talent. The baseball recruiting process stays on the sidelines. There is an obligatory love interest for the daughter which does not detract from the father-daughter relationship either. The rest of the casting is solid if unremarkable. I don't remember the background music. Remember what happens every time A League of their Own or The Sandlot is shown on cable? You usually watch it. Trouble with the Curve looks to be one of those movies.

The extent of my city bicycle riding is relegated to those few times when I used to hang out with some bicycle people. I have sorry memories of lagging far behind the other riders. Of course, I was riding a hybrid while they were using cruisers. These days I keep my riding to park trails well outside Boston. Premium Rush is about bicycle messengers in the Big Apple. A baddie cop really wants a packet that is to be delivered by one of the bicycle riders (Note: this isn't giving away anything. We sense that that cop is a bad apple right from the first scene when he is shown). So a chase begins with the cop driving a car and our hero messenger on a bicycle through the busy streets of NYC. The foot chase in the first Bourne movie was exciting. But this one is filmed better. No handheld cam type shooting, for instance. That makes for a much better viewing experience. The other characters are obligatory. This movie is about the baddie cop and the goodie messenger. The baddie cop, who I thought was pretty good (in his performance), also provides some good humor. The director's sense of visual style is very appealing. I don't remember the background music. I might probably watch this one now and then on cable.

If you liked Syriana, you will like this one really well. Same totally absorbing tone. Not as much background music. And equally as long. And unlike Tinker Tailor Soldier Spy which starts very slow, this movie starts briskly and maintains an even pacing through to the end with several adrenaline rushes thrown in here and there. I was out with a date last night who raved about Django Unchained. I told her not to drink any fluids if she decided to watch Zero Dark Thirty. She needed to stay in her seat for this ride. As for the plot, we know Usama Bin Laden will be killed toward the end. So the movie is all about the buildup to that well known end. Most of the casting is really good. I thought the navy seals would come across as cocky and gung-ho. But they are shown as nervous and calm types who wait around and then eventually execute their orders in a workmanlike way. The lead actress playing the CIA analyst was steady with her performance. Will I watch this one again? Probably. But the three hour running time means I likely won't watch it as often as I would have liked to.

While my friends complained the movie was long, I had made a point of not drinking any fluids during the last hour before the movie started and this might have been my saving grace. It struck me as well-made and absorbing enough. The opening scene with its very partial showing of the dragon is tantalizing and amazing and made more so by the IMAX 3D viewing. But...too many monsters throughout the movie. They are really laying it thick on the CGI these days, aren't they? The goblin battle came across as a bit tacky and there were way too many goblins. I certainly hope the 2nd and 3rd movies use some superior editing before being unleashed on the audience. To me, the highlights of the movie were the opening scene, the conference between Gandalf, Galadriel (Cate Blanchett...yum), Saruman and the other dude Elrond, the encounter between Bilbao and Gollum as well as the encounter with the cave trolls. And they all speak English, huh? The acting is steady and I don't foresee any Oscars here. The background music and the wonderful portrayal of the scenic shire take you back to the first Lord of the Rings movie in 2001.
Posted by Hoarse Whisperer at 10:01 AM No comments: