For the past year, I have been cooking my (whole) eggs in bacon grease (left behind from frying bacon). I am never going back to olive oil now that I have gotten very used to the distinct flavor of frying eggs in pork fat! Although I have received some nods of dissent from friends, I have continued to do so. Joy!

Anyway, here is a great article from Food & Wine that I recently came across:

http://www.foodandwine.com/articles/lard-the-new-health-food
Posted by Hoarse Whisperer at 12:45 PM No comments:

...and I honestly don't have a clue as to what to write about

It's a total blank in there, man.

So, to settle the matter once and for all, I will just throw in some random photos starting with a closeup of my legs 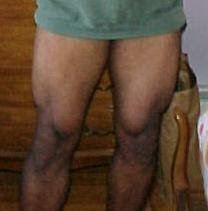 Vell, I am sorry but I cannot reveal "more" of ze man.

And here is something for the poetically inclined: a picture of a sunrise that I shot along the waterfront a few mornings ago as I was walking toward the garage. It was real early and still considerably dark. 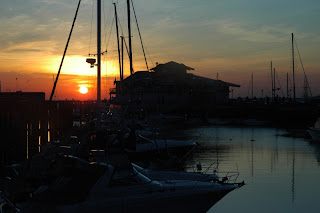 And for those not so poetically inclined: a real early breakfast I prepared and consumed with gusto at around 3 AM this past Sunday morning after wrapping up a Halloween party at my friend David's place. The train's had stopped running and I ended up walking all the way to my apartment in the North End from his place in Inman square. So, yeah, my knees felt like jelly and I was ravenous by the time I got home. I didn't wake up until around 12 or so Sunday morning! 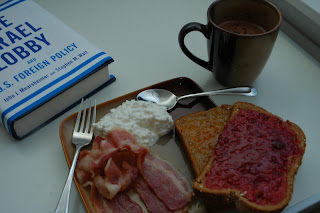 A few slices of bacon, some cottage cheese and a couple of slices of dark wheat (slathered with apricot and raspberry jam) washed down with a bit of hot chocolate.

How about a photograph of my Uncle and cousins? I took the shot when I visited them in Hyderabad back in 2004. 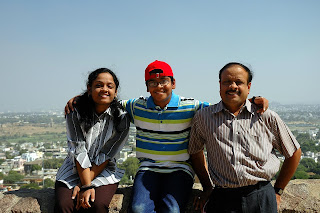 Hopefully I will get to see them again in 2008!!
Posted by Hoarse Whisperer at 6:30 AM No comments:

Wild fires in the west are not uncommon. But this is a real disaster! 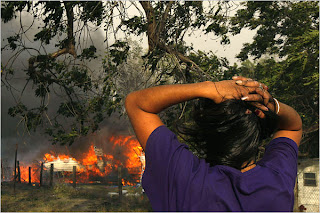 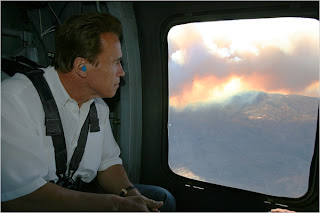 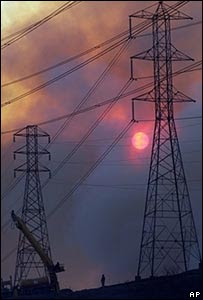 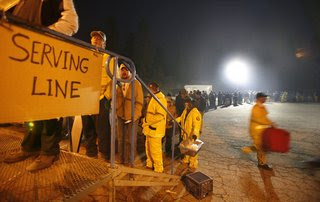 Like waiting for bread in the former Soviet Union.
Picture Courtesy: Sacramento Bee. 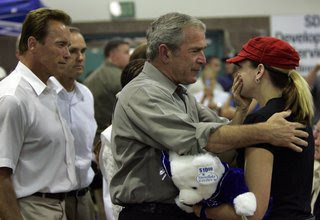 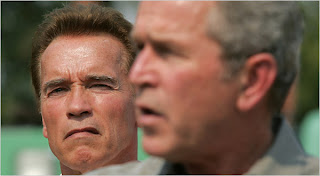 And later on at a press conference in Escondido... "President Bush speaking about the fires Thursday while Gov. Arnold Schwarzenegger looked on. The men had previously not made a habit of supporting each other."
Picture Courtesy: Saul Loeb/Agence France-Presse-Getty Images.

And only last week, I was telling a date that it should be a sea change to live in California

Posted by Hoarse Whisperer at 11:19 AM No comments:

Last night I had to literally close a door in my office as two of my coworkers were being so chatty that a customer I was with on the phone wanted to know if we were starting to have some sort of party. I think for some being chatty makes them productive at the workplace. Now that is not a problem for me at all as long as it does not get disruptive. There was a point in time when I felt that I was starting to chat a lot in the office too but decided a while ago not to socialize so much in the workplace. It wasn't that the chatting was cutting into my productivity. It wasn't. Being single, I could stay around longer and get things done. The decision really had more to do with maintaining a semblance of discipline or polite restraint in my "official capacity".

Speaking of being single, yesterday's incident did make me finally realize something this morning: that I am probably still single because I am not given to talking a lot. I am generally the quiet type but when the fit is on me, I can talk like heck (such fits, however, are rare). So...I don't know if it is good or bad that 9 out of 10 women want to talk like there is no tomorrow. Take my neighbor (who, incidentally, smokes like a chimney; I feel so bad for her dog) and her boyfriend. She is hot; he is not. She probably weighs around 130 while he is closer to 350. Then how in the...? The answer is simple. I have woken up some mornings, looked out my kitchen window and...they were still there in her kitchen a-talkin' from the previous evening!! Now that guy is clearly keeping his woman happy...but at the expense of what? A night's worth of sleep?! Or more? I think that I like my life the way it is. 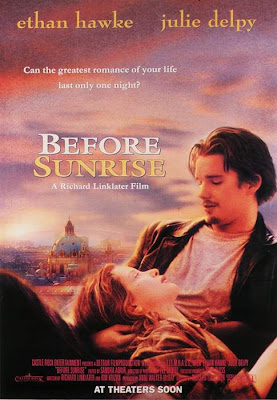 Is she worth it?

I lowered my standards a bit earlier this year by talking about whatever that came to mind (when I didn't really feel like doing so) while out on dates because I was trying too see if I could appear more interesting. But I only came out feeling silly, a feeling I did not like one little bit. So now my standards are back up to where they were and I couldn't be happier.
Posted by Hoarse Whisperer at 8:20 AM 2 comments:

So I stopped by my brother's place last night. We usually train with weights when we get together, a productive way to spend time together (instead of gorging on buffalo wings and gulping down beer at some bar). It turned out to be a rather eventful evening actually!

I hadn't done towel chins in a while. So we started with those. After about 3 sets of only 5 reps each, my fingers were screaming in pain. But the fact that I had gotten 15 reps out of the movement after not having done it in ages was reassuring (guess grip power acquired through rock climbing doesn't die hard). 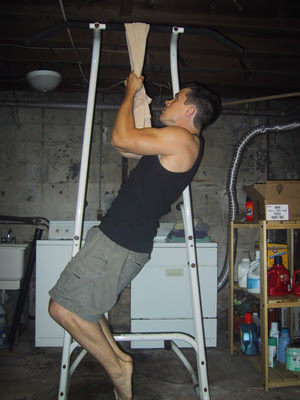 We proceeded to Romanian Deadlifts next. I started by warming up with Waiter's Bows using a 45 lb plate. My hands were a bit shaky from the chins. The plate slipped and fell. I moved just in time to prevent the plate from dislocating my kneecaps or crushing my toes (I train barefeet whenever possible) but not fast enough: it took some skin of my lower thighs on its determined journey down. 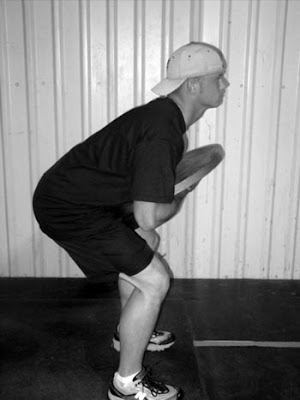 The Waiter's Bow. That ain't me either...

I decided that I wouldn't want to do the Waiter's Bow after towel chins. Ok. This wasn't too bad but it could have been...

Later we were watching "Silver Blaze", a Sherlock Holmes episode on DVD, when my brother's neighbor Louise called. She sounded shaky and apprehensive,

"Can you come over please?"

So we rushed over. Scotty, her 6-month old miniature Schnauzer, had taken a tumble down the stairs and was lying on the floor just inside her front door. The poor fella had what looked like a broken front leg. So while Louise was on the phone with the vet, we patted and soothed the little bugger as he alternated between moments of silence and piercing wails. I learnt today that he had had a fracture and had to go under the knife earlier this morning if early arthritis were to be prevented (as opposed to a simpler solution that would have cost Louise much less than $2500). I should know in a few days how well that limb is going to recover. But if I know the Scot-man, he will continue to get around with a great deal of enthusiasm, arthritis or not.

I couldn't help but cross-reference what happened to Scotty last night with several things: 1) I could have ended up with a serious injury earlier that day myself while training, 2) Scotty's plight was much more serious than what happened to that horse in the episode of "Silver blaze" and 3) I was reminded of when my brother (who was visibly upset and pretty pissed at Louise for being less than attentive with Scotty yesterday) suffered a compound fracture of a leg during a game of cricket in our early teens growing up in India 15 years or so ago.

Stuff like this makes you pause and take stock.
Posted by Hoarse Whisperer at 7:36 PM No comments:

So I was up at Colebrook recently visiting Russ' Dad's place. It was a 5 hour drive from Boston but Russ's pickup was pretty comfortable. I was hoping to get some great pictures of the foliage. But the weather for the most part was wet and dreary and the light kept changing constantly. And, of course, there had also been a moderate amount of leaf drop.

Here are some photographs from our trip. They were all shot hand held using a Nikon D70 set to automatic white balancing with high color saturation. Click each picture for a larger version. 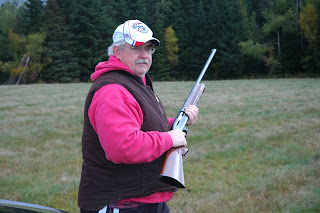 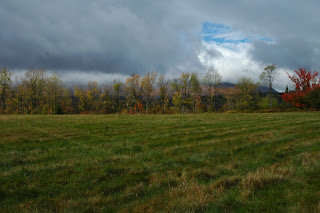 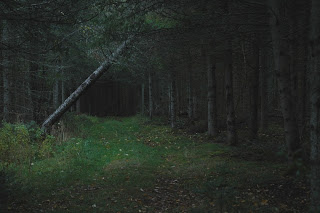 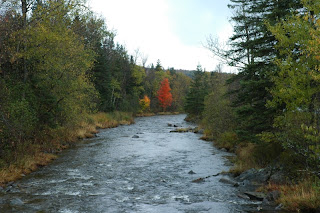 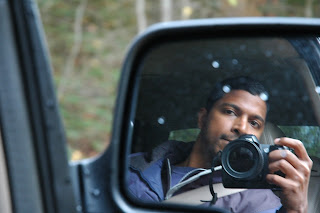 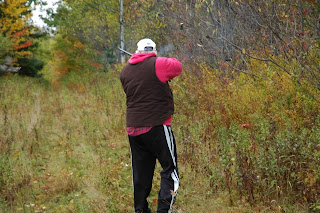 And so did Russ...at the occasional grouse that had the audacity to show itself in his presence. Note the bird in the top left corner of the picture.
Manual, 1/250 seconds, F5.6, ISO 400, Fill Flash 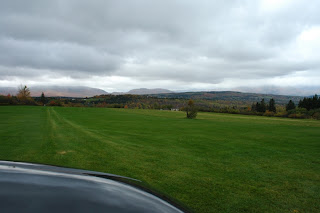 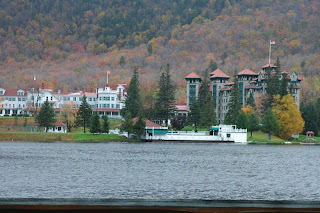 Then we visited the Balsams. The buildings reminded me of Bavarian architecture.
Aperture Priority, 1/320 secs, F8, ISO 1000 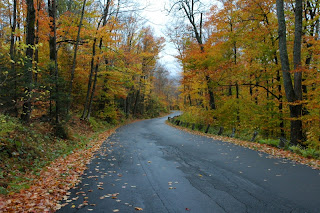 Then a nice winding drive took us to the Balsam's clubhouse for lunch.
Aperture Priority, 1/250 secs, F8, ISO 800 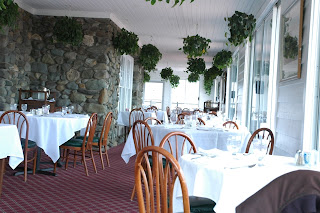 The clubhouse was on top of a mountain. I lunched sumptuously on Salmon caesar salad, margaritas and coffee!
Aperture Priority, 1/15 secs, F8, ISO 1000 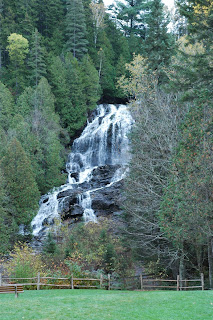 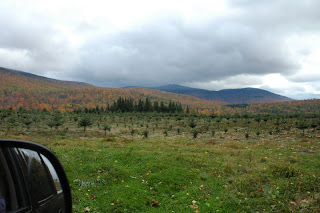 Outside Colebrook and on our way back home, we stopped at some guy's farm where Christmas trees were cultivated. You can make out a dusting of snow on one of the distant peaks.
Aperture Priority, 1/640 secs, F8, ISO 800 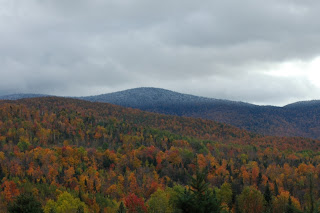 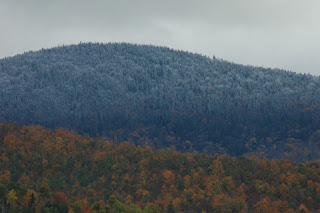 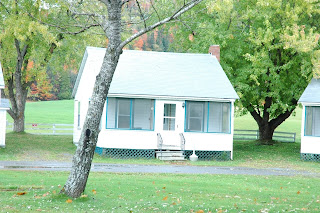 The cabin we stayed in was cozy and comfortable. It had two bedrooms and a good-sized living room with a fireplace. Maybe I will bring a girl here someday to roll around in the hay with...
Aperture Priority, 1/80 secs, F8, ISO 400 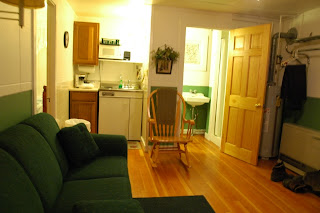 I made a mental note to bring my ND grad filters (and tripod) next time around as quite a bit of the pictures came out with overly exposed skies. It was all in all, an outstanding weekend!!
Posted by Hoarse Whisperer at 7:19 AM No comments:

I know. I've not been writing much on this blog. But between homework for my Art class at UMASS and a surge in "stuff" at the office, I rarely feel like spending more time before a desk elsewhere...for the time being.
Posted by Hoarse Whisperer at 7:11 AM No comments:

Anyway, come end of October, I am taking hang gliding lessons up in NH. Here's hoping for a more dignified experience...
Posted by Hoarse Whisperer at 3:35 PM No comments: