Last night I made a few (mostly positive) observations at the gym. Here they are in no particular order:

1. All three (3) squats racks were being used for...(drumroll)...squatting! Two guys were doing back squats while I did front squats (225 for reps, I should say). And one of the guys actually squatted ass to the grass! 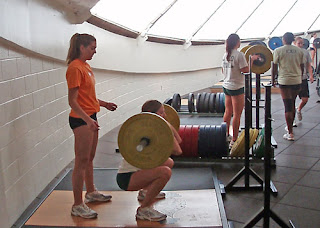 But my fellow squatters were all male. So unfair!

2. I spotted an Indian guy. Would you believe that?! An Indian guy at the gym!! He looked dweeby, which really is a perfect reason to get into a gym. But...I am overjoyed just to have seen a (dweeby) looking Indian guy in the gym! Yay! The fact that he did a 180 and started walking the other way as soon as he saw me didn't matter (FOB Indians are like that). I was just too elated to care!! 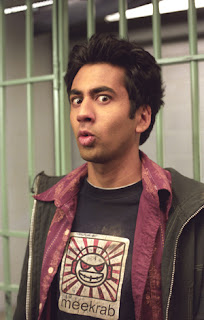 I heard Kal Penn was pretty good in The Namesake.

3. I was wearing a green football (that's soccer to you, gringos) t-shirt with the word "Ronaldinho" emblazoned on it. I wonder how many Patriots fans thought I was trying to send them a message ("Try switching to soccer, you monkey!") in the eve of the Patriots' upset at the superbowl :) 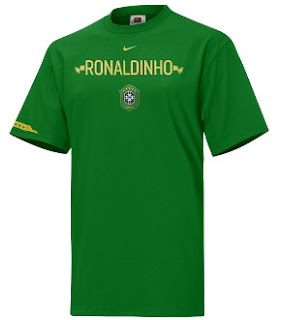 4. A blonde cutie was actually doing the Ab Pulldown. And with her low cut top, an area of 10 square feet around her became a dangerous place to be in for a while there. Incidentally, the Ab Pulldown is my only dynamic movement (notice I didn't say "exercise") for directly training the abdominal wall. This movement also immediately relieves lower back ache that can occur as a result of doing Squats and all bending movements (Deadlifts, Goodmornings, etc.). Since the abs are also trained isometrically during Squats and all heavy bending work, I don't bother with crunches, side bends, planks and assorted sh*t that everybody else seems paranoid about.


I think the chap in the video is Dave Tate, a world-class Powerlifter :)
Posted by Hoarse Whisperer at 6:46 AM No comments: