Rather than talk about my entire history there or the quality of education, which largely will come down to an individual Professor's ability to engage their students and the students' own work ethic and motivation, I will just briefly point out stuff I observed on graduation day on May 31, 2019. 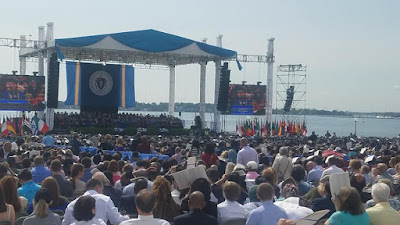 In the end, the ceremony was anti-climatic for someone of my experience and age.

I have some fond memories from over the years of attending classes, making a few friends -- still connected to a couple of them on Facebook -- and meeting my first girlfriend in one of my distribution requirement classes. Anthropology, I think. She was a ballerina who eventually moved to Florida to work for Sarasota Ballet and to continue her education there. We wrote letters to stay in touch but stuff stopped eventually happening between us and I lost track of her. I still have her letters and a photo of us together. And I have fond memories of just being on campus and trying to figure things out on my own in the complete absence of mentors.

UMB is a beautiful campus. Very accessible by public transportation. And it will become more beautiful as further construction, landscaping and building renovation work get done in the next couple of years. Also, there is much better in-campus parking and huge Freshman dormitories today.. all built in the last couple of years. Campus wide Wi-Fi has been in place for several years now. And, by the time I left, more professors were starting to use online products like Blackboard and realizing that new students preferred a connected experience to printing papers out. So I expect newer students to have a modern, updated experience. But the graduation rate was only 51% at last check. Compare that to Harvard University at 97%. But the latter is much more expensive to attend and there is prestige involved in attending and graduating from there. So the students there, high-achievers or not, are driven to develop a solid work ethic and maintain a compulsion to finish. Will UMB manage to cultivate that sort of work ethic and dedication in more of its student bodies? That remains to be seen.

I strongly recommend that students start working with an academic advisor right from the first semester. It is never too late to begin with an advisor. So do it! They will be the closest thing to a mentor students will get on campus. I never paid attention to an academic advisor during my first run in college many years ago. The cavalier attitude thing coming into play then. But, during this second and final run, my academic advisor Alex was a huge help in seeing that I stayed on track to finish. My biggest advice to students though is to welcome mentors in your life from outside the college. You likely cannot go asking for mentors. Well, how about people close to my own age? Drink with them. Sleep with them. Play with them. Compare notes with them. But don't listen to them. Just keep an eye out, ok, when meeting new people.. as a good mentor that you click with can accelerate your success in life whether it is to do with career, romance, etc. Well, why can't I just listen to my parents? Parents are inherently good, well-meaning people. But understand that parenting and mentoring are two different things. Your parent may be a great mentor to someone else but an awful mentor to you. It will come down to their own experience and outlook on life. And, yeah, its great to be able to experience and figure things out by yourself. That certainly builds character. I get it. But a mentor can help shave off years of dawdling in your life. So find a good balance in bringing people into your decision making process and get on with it.
Posted by Hoarse Whisperer at 10:21 AM No comments: