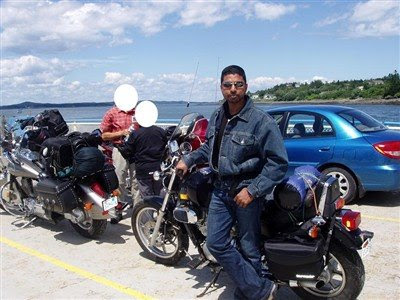 On the ferry crossing to Deer Island.

So Mike and I rode up to Nova Scotia on our motorcycles. I rode a 93 Kawasaki Vulcan 750. It was a two week trip. I will reminisce about certain observations I made in a different post. In this post, I will just quickly outline our trip route.

Quincy to Bar Harbor: Nice, sunny ride. I got really comfortable with the bike at highway speeds. We stopped at Rockwell for dinner by the waterfront. Then camped near Bar Harbor. We got to the campsite late and had some difficulty setting up the tents.

Bar Harbor to Sussex, Canada: Nice, sunny ride. We exited the US via Lubec and went over Deer Island to the Canadian mainland. We stopped briefly in St.John to get Canadian currency as well as do a bit of shopping. We camped late in Sussex but not before hunting for a place to dine. It was dark when we set up a camp.

Sussex to Advocate Harbour via Joggins: Nice ride although not always sunny. We made a stop at the Joggins fossil cliffs where I bought my first magnet to go on my fridge. From here it was a winding road -- Shulie road -- to Advocate Harbor. This road was surrounded by tall, thick timber on both sides with occasional glimses of the ocean and felt like it belonged in another, ancient time. The Vulcan at 480 lbs was very nimble and performed superbly. This stretch of riding was the most memorable for me and I would not mind going back to ride it again. We made camp early and comfortably set up our tents. We also made our first campsite fire.

Advocate Harbor to Truro: It rained, man! It rained. The Vulcan seemed steady enough. My lower body was soaking wet a few kilometers into the ride. Twisty, mountainous and foggy roads did not help. The Vulcan's carbs briefly clogged but cleared up right away after restarting the engine. In Truro, we dove into a motel to dry off. And..we showered. Separately, of course. I got wetskins in Truro. We also made a brief change to our trip route. 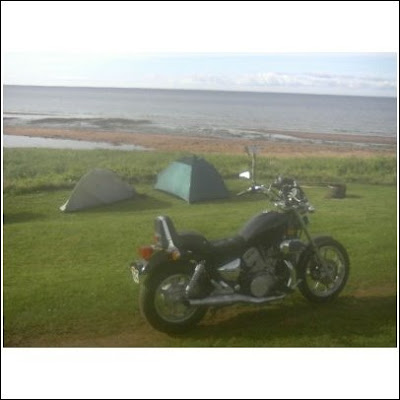 Nice, sunny ride. We visited the Jost vineyards and later camped off the ocean in Seafoam, where a bottle of Jost wine was promptly taken care off by a fire. For me, this was definitely the best camping experience on this trip.

Seafoam to Margaree Forks: Quite a scenic ride although not always sunny. The Vulcan loved it. We stopped at the Glenora distillery near Inverness and I sampled their 18 year old Whiskey. Really good stuff but we were on motorcycles and so I had to quell that yearning within me. We stayed in a motel at Margaree Forks. Other than a square dance near Margaree Harbor, there was nothing else happening in town. It seemed like it took forever to ride to dinner near Margaree Harbor and back. I tried Alexander Keith's for the first time and made a mental note to look out for this beer back in Boston.

Margaree Forks to Glace Bay via Baddeck: A bit of a drizzly ride. By this time, I was handling the Vulcan like I was born on it. The Yellow Cello breakfast place in Baddeck was awesome. After eating, we punched it all the way to Glace Bay to take a coal mining tour. This was also a great experience but don't ever dine in the Miner's village restaurant, steps away from the museum. Easily the worst service I saw on our trip. We camped near New Waterford. A wedding party decided to camp there as well. It was like a zoo come alive at night.

That from my next tent neighbor to her obviously drunk boyfriend, who kept, get this....giggling! And shortly after, a tent line twinged like somebody had tripped over it.

Geez! No wonder I couldn't sleep...

Glace Bay to Canso: Nice ride although only sunny very briefly. Noticed a teeny-weeny leak near the final drive unit in the Vulcan earlier in the day. I decided not to let that bother me. We also made a random stop at a very rocky beach on the way to Guysborough, where I almost slipped on a rock. It did, however, take about a square inch of skin off the bottom of my left foot. But my brother had thoughfully slipped a first aid kit into my saddlebags and that was used diligently for the next fews days to clean and dress the wound. Got cold and miserable toward the end of the ride but the sun came out briefly and the soft evening light was spectacular. We camped by the ocean near Canso but it was slightly drizzly and windy and nowhere near enjoyable as Seafoam had been. Pizza and beer for dinner at a distant eating place called AJ's. It seemed like it took forever to ride there and back.

Canso to Sheet Harbour: Gloomy but mostly dry and really bumpy ride. My speedometer cable near the wheel came undone. Easy fix. The only happening thing in Sheet Harbour was...our motel. So there we stayed and I brought my journal up to date. The waitress at their restaurant was kinda cute but didn't seem too bright.

Sheet Harbour to Halifax: Nice, sunny ride. Got pretty hot close to Halifax. You know when you are near a big city. Their harbourwalk was real nice. We visited and relaxed a bit in a couple of churches. But there was a sort of inconsistency about the building architecture on their streets. We met some interesting characters there which I will point out in my reminiscences. We actually stayed two nights in Halifax. On the second morning, I couldn't wait to get out of the city. Most of the sh*t there, I figured, I could do in Boston.

Halifax to St. John via Digby: Nice, sunny ride that got real wet toward the end. The Vulcan's carbs clogged again and this time it took longer for the bike to "unclog". We had to wait several hours for the ferry. So we tried the famous Digby scallops. I thought they tasted like the scallops I've had in New England. There was a french girl, another patron, in that restaurant we ate who stayed in my mind for days after. Mike would attest to that. We took the 3 hour ferry from Digby to St. John. It was a drag as the weather was gloomy and the seas slightly choppy. So I dozed.

St. John to Bangor, Maine: Mike wanted to get back to the US that same night. So as soon as we landed in St. John, we took off for the US. It was dark and very foggy. I told myself that I would never ride in those conditions again. It was scary really! Route 9 from Calais to Bangor was scarier. By this time, weather conditions had improved but I was low on fuel and all the fuel stations were closed on Rt. 9. And we still quite a ways off from Bangor. It was no man's land. Anyway, we got to Bangor and found a hotel but not before hunting around a bit.

Bangor to Bethel: Next day we left late to join Mike's friend who were to be camping in Vermont. Bangor to Skowhegan was a good ride. But then the rains came and we did some miserable riding. I was totally out of it after a while and so we found a motel. And I am glad we did. Otherwise we could have ridden into the white mountains in that weather. I told Mike that I wanted to get home since it was Saturday and I had to be in the office on Monday.

Bethel to Quincy: Nice, sunny ride. We split up once we reached 93. Mike went North and I cut for home South.

I hadn't intended the trip to be a vacation in the true sense of the word. So I actually enjoyed it. It was an...experience. And I am very pleased with the way my motorcycle performed!

Posted by Hoarse Whisperer at 6:55 AM No comments: