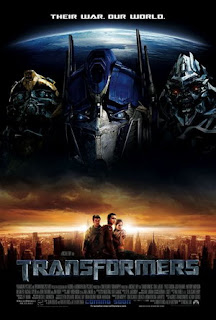 Dios mios! What a boring movie! The lead character was so annoying! Check out the way the hot girl ends up teaming up with him. She is casually going by on a cute scooter in a part of town that she normally wouldn't be in. Alright? It so happens the lead dude was being pursued by a monster robot at that time...in that part of town. Alright? The lead dude and hot girl run into each other and then start running away together from the monster robot. And what's with the other hot girl with the british accent who is an expert on signals (as in communication technology not as in body language) and has a fat black fella (played by a ditzy Anthony Anderson) for a buddy? I have yet to see that combo in Beantown. I thought that british youth were only good at one thing: boozing. The fact that I was spending time thinking about stuff like this while watching the movie should tell you about the quality of its screenplay.

The robots had more personality than the humans. I understand that this movie is about special effects but I have had too much of movie special effects in the last few years. After about 5 minutes the novelty of seeing beeeeg robots quickly wore off. And anyone who wants to see a huge robot (and lots of heart) should look up the Iron Giant. So...2/3rds of the way into the movie, I gave up. And I am glad I did because Namaste Yoga was on.
Posted by Hoarse Whisperer at 7:15 PM No comments: