I am familiar with how the US Fish and Wildlife Service conserves habitats by controlling the population of flora and fauna. A lot of people don't realize this but hunters, for instance, are allowed only certain bag limits for certain animals in certain regions/counties in certain times of the year. A lot of the revenue from annual hunting licenses is actually used in such conservation efforts. And I know at least one family in New Hampshire that lives on meat from a whole deer during deep winter.

Apparently a redneck with a DUI conviction...according to an email that is going around.

Did you know that various states have hatchery programs using which they grow fish and then use these fish to stock local bodies of water? So next time you see a bunch of guys fishing in a pond, they likely aren't overfishing that pond.

A lot of developed countries do have such infrastructure in place to monitor habitat use. But developing countries do not have the resources (or the deep-rooted passion necessary) to regulate environmental use. Take India as an example: the Tiger population continues to dwindle owing to habitat loss, poor oversight of poaching by forestry officials and ill-equipped/ill-trained rangers. And, again owing to habitat loss, people here in the US are having more frequent run-ins with wildlife (like mountain lions).

Here are some photographs from earlier this year: 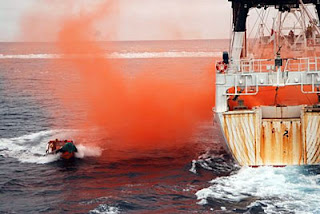 I think that they are both idiots. 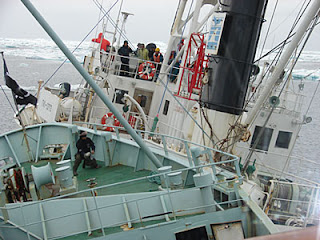 See what I mean. 'twas a good thing this accident didn't lead to a fuel oil spill.

I do admire these "doers". But in a way, extreme environmentalists remind me of religious evangelists. They are both, in a word, annoying!

The following is a projection of human population all the way to the year 2050:

The United States Census Bureau has projected that there will be around 419 million people in the US alone by the year 2050.

And this is why when conservation groups talk about restricting fishing on "overfished" seas and stopping real estate development on wilderness, I put on a sardonic smile.

9 billion people by the year 2050! No wonder I don't see any point in restricting myself as to how much fish or meat I eat today. Sure I could go vegan but how will that help feed 9 billion people in 2050? Going vegan today so that there can be enough fish for some jerk born into a royal asshold 30 years from now sounds ludicrous. It is f**king ridiculous to worry about people who are not even born. And if everyone does go vegan, wouldn't there be a higher demand for land use so that all the soy and assorted grains eaten by vegans can be cultivated? And what happens when more land is cleared for agriculture? Wouldn't more species go extinct then? 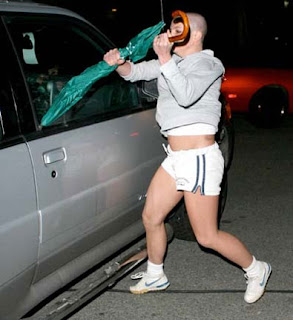 No. I am convinced that its a simple supply and demand issue. We can either lose species or regulate human population growth more tightly (and we know that the latter is a losing proposition). We have enough people today who have evolved into something that has little resemblance to a once robust species, a direct result of the heavy reliance on the comforts of technology (and watching too many ballgames). Add a strictly vegetarian diet and you probably will end up with humans with hoofed feet. If that is how we are destined to evolve, fine. 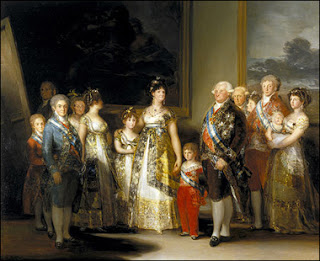 "As you know, we are festively plump."

Anyone who wants to know the sad state of human affairs need look no further than the myriad of costly problems (from a bloated public education system to greedy unions to a huge deficit) being faced in California. That American dream state has had these problems for years and there are no solutions in sight (too much partisan politics). I am quite sure that they have time to worry about a bunch of tuna at 35° 41' N 139° 46' E.

Who knows. Maybe a meteorite will crash on Earth and put a full-stop to everything (too bad the planet does not have a reboot button like that on a computer). Then maybe, just maybe, the planet might re-generate life...perhaps without organized religion this time around.

Posted by Hoarse Whisperer at 9:49 AM 6 comments: