I was afraid that, with the US in Afghanistan, Baseball would find its way into that country. But it looks like Cricket has made it first. Yay! 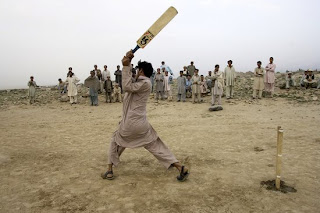 This following article is about a documentary team that has been following Afghan Cricketers touring around the world recently:

On a side note, this is the kind of article that makes me wish that I had never put together a post like this one. It is not that I guzzle down all that food in a single day. I don't. The photos of the food in that post were made over a period of months. Still I have been feeling a bit guilty about that post. I wonder how someone from a war-torn country might feel if he or she were to chance upon that particular post of mine: Would it inspire them to seek a better life elsewhere, fuel their drive to make their own country prosperous or turn them into another western world-hater?

In any case, being a bit more mindful of what I post shouldn't hurt.

Posted by Hoarse Whisperer at 12:16 PM No comments: